I was reading the book Atomic Habits by James Clear and came across this amazing story.

It was summer of 2003, David Brailsford, found himself to be in a rather unenviable position. He had just been appointed as the Performance Director of the British Cycling team.

The team had not won a Gold in Olympics or for that matter any Olympic medal since 1908.

100 Years on and the team performance had gone from bad to worse.

A Cycle manufacturer even refused to sell cycles to the team as they were afraid to lose business if their brand was seen with this losing team!

Things could not have been worse.

David implemented his strategy of “Aggregation of Marginal Gains”

“If you break down everything you could think of that goes into riding a bicycle, and then improve it by 1 percent, you will get a significant increase when you put them all together.”

He did small things like he made the seats more comfortable, rubbed alcohol on the tires of the bicycles for better grip, improved the body suits to maintain the ideal body temperature etc.

He did not stop here.

Five Years later in it was 2008 Beijing Olympics!

This team won 8 Gold Medals and broke 7 World Records and in 2012 London Olympics they did even better….and in between won Every major world tournament!

The 1% improvement strategy had paid off big time!

Where could you use this in your Business?

One way I can think of is listing down some of the elements that go into your business: 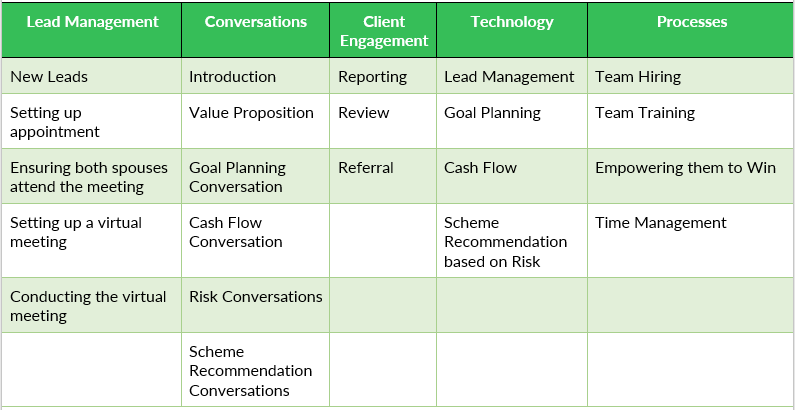 Can you list down ONE thing that you want to improve in each of them and implement them?

1% daily improvement in any of them will still get you huge compounding improvement of 130 in just a month!

After all you do not need 4 Olympic years to become the best version of yourself and deliver an experience which your clients will love.

I have been personally interacting with a lot of distributors and advisors and so are my colleagues. Every firm is going through similar challenges. First it was the sharp market c ....Read More

My session last Saturday at NetworkFP’s Conference was on the New Trends and The Future of Financial Planning. While I spoke about the different trends, my first key point was on ....Read More

This Change will Future Proof your Business

Many of you wrote to me in response to my last Nano “Chief Change Officer”. The most common question was “What do I change?” I have written to each person individually with ....Read More

Let us WOOP it NOW.

I had written a post about WOOP on October 27th, 2020. In case you have not read it or cannot recollect it, I would strongly urge you to read it now. WOOP is simply one of the most ....Read More