A respected entrepreneur with 25+ years of Experience, Amar Pandit is the Founder of several companies that are making a Happy difference in the lives of people. He is currently the Founder of Happyness Factory, a world-class online investment & goal-based financial planning platform through which he aims to help every Indian family save and invest wisely. He is very passionate about spreading financial literacy and is the author of 4 bestselling books (+ 2 more to release in 2020), 8 Sketch Books, Board Game and 700 + columns.

My colleague Mahesh sent me this image last week. 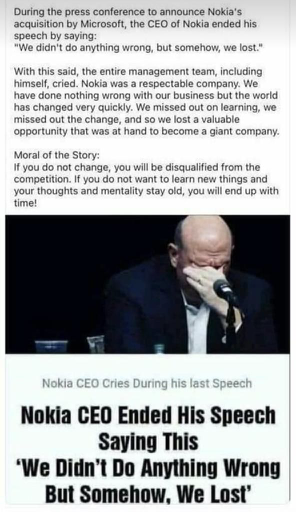 Nokia (a company from Finland) was the first to create a cellular network in the world. In the late 1990s and early 2000s, Nokia was a global leader in mobile phones. Nokia was founded in 1865 and is even older than Finland. In 2000, Nokia accounted for a mind boggling 4% of Finnish GDP and 70% of Helsinki’s stock exchange market capital and 21% of total exports. At its peak in 2006, Nokia had 41% of the mobile phone market worldwide.

Can you believe what happened to Nokia despite dominating the mobile phone market worldwide?

One of Nokia’s fatal mistakes was the fact that they did not want to lead the drastic change that was required in user (client experience).

Why change when the going is good?

This is a common refrain in our profession/industry too. Many distributors believe in this “Why do I need to change NOW?”

While having a conversation about change and succession planning, a distributor recently told my colleague Rupesh “I don’t care what happens to my clients after I am not there. It doesn’t matter. I will continue this way as long as I live.”

This was the first time we had heard this brutal but honest response, and this was clearly an outlier. Most distributors will never be as blunt as this, and I am sure they care for their clients. However, their actions say, “I don’t care”, without them even realizing it.

The reality is that Nokia didn’t care and didn’t want to change till it was too late.

On the other hand, last week, Mark Zuckerberg said that Facebook will switch its name to Meta.

“From now on, we are going to be metaverse-first, not Facebook-first,” Zuckerberg said at the Virtual Connect conference. While this will not change any corporate structure, it will now report 2 operating segments: Family of Apps (Facebook, Instagram, WhatsApp) and Facebook Reality Labs (VR/AR/Metaverse operations). Its stock ticker will change from “FB” to “MVRS” on December 1.

While critics say this is a distraction in the wake of critical reports about Facebook, the reality is that Facebook has been investing in this technology for quite some time and has always been forward looking in terms of what’s coming next. They are hiring 10,000 people in Europe to work on the Metaverse even if it means that its operating profit will take a $10 billion hit.

Mark Zuckerberg bought Instagram for $1 billion in 2012 before Facebook’s IPO. It was such a smart move but very few people could see it then. He had written in 2012 “For years, we have focused on building the best experience for sharing photos with your friends and family. Now we will be able to work even more closely with the Instagram team to also offer the best experiences for sharing beautiful mobile photos with people based on their interests.”

Another such acquisition was the WhatsApp one for a mind boggling $19 billion. It didn’t seem to make any sense to the critics but to Facebook it did.

What they have done now is not simply a cosmetic rebrand to avoid negative publicity; it’s a clear change in strategy and an investment in the future, when the going is still great for them.

Coming back to our profession/industry, we worry about things such as ARN and Logo, while we ignore important things such as client experience, value proposition, strategy, changes in business models, leadership, digital transformation, team building, succession planning and so on.

Bracken Darrell, the CEO of Logitech, said, “As you go forward, the more successful you are, the more you have to break things or create this sense of urgency, because people tend to not want to change things when they are working.”

While the going may be good for you, this is the time to effect change.

What do you think? Whose story of change appeals to you?

If so, who would you rather be in this Story of Change? Facebook or Nokia.

In short, what’s going to be your Way?

There is no better time than Diwali to make the change that your firm might require. If you need any help, we are always an email away.

On that note, I wish you and your family a very Healthy, and Happy Diwali.

About historical patterns and predictions of the future

This is 1 Realization that can transform your Life and Business

I am sure some of you would know the realization that I may be talking about, but I am not sure if you understand how powerful this can be for your life and business (if you implem ....Read More

Winning is a Process (The How of Winning)

Do you agree with this line? Even if you do not, you will agree by the end of the next few paragraphs. Scott Adams (creator of Dilbert) in his book “How to Fail at Almost Everyt ....Read More

The Next Smallest Action

I had thought of writing an interesting post (this week) with the headline “Are you TAMPing it?” As I started writing this, I felt that I had left a few thoughts incomplete in ....Read More

What can you learn from the iFast Story?

I had published a post headlined “Emma” exactly 5 months back. Before I go ahead, I think you should watch this video (even if you have watched it before). It will bring a smil ....Read More

Authors Panos A Panay and R Michael Hendrix in their book “Two Steps Ahead” wrote some interesting lines about collaboration. They start with a question - Have you ever found y ....Read More